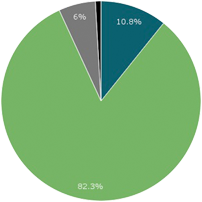 In 2013, female:pressure released a survey addressing the lack of equal opportunity and visibility for female artists in the electronic music scene. The f:p FACTS study showed that festivals, labels and clubs worldwide barely feature 10% of women. While it appears that this issue is being covered more often in the media and the FACTS study itself generated a lot of open discussion and debate, we wanted to see if the number of female artists included in line-ups and releasing music has actually changed in the year following the initial survey. We have therefore conducted a new survey for 2014 along the same lines in order to compare the results over time.

The objective of the survey 2015 is to roughly quantify the current situation and expose the very real inequalities in this industry that indeed are symptomatic of a broader problem across many other sectors and in society. Although counting in this manner is not statistically precise, we believe it does clearly indicate a trend. And that trend is, sadly, that things are not improving and, for whatever reasons, women are not gaining fair representation in the scene.

With respect to our goals as an international network for women in electronic music, we can only conclude that there is still a need to openly address these inequalities and level the playing field.* The lack of female visibility has been demonstrated to be particularly insidious in other areas as well. One prominent example is the blatant underrepresentation of women in the media, which has been so consistent throughout the decades that it threatens to warp our very perception of reality, making it seem ‘normal’ that half the human population is only visible 17% of the time (in the case of cinema).** After all, that’s just the way it is – right?

“We just heard a fascinating and disturbing study, where they looked at the ratio of men and women in groups. And they found that if there’s 17 percent women, the men in the group think it’s 50-50. And if there’s 33 percent women, the men perceive that as there being more women in the room than men. … What we’re, in effect, doing is training children to see that women and girls are less important than men and boys. We’re training them to perceive that women take up only 17 percent of the space in the world.” – Geena Davis